If you follow me on Facebook, you have seen my postings that start with “Consultant walks into a bar, Take 1000.” This past week at a hotel bar in Southern CA I sat next to a man in a cowboy hat who took a phone call and began to share with his friend that he was doing well. Yes, it had been nine months since his wife’s death. He was learning how to use the dishwasher. He was being set up on blind dates by his daughter. He mentioned he was a blessed man and thanked the man for his call.

I eavesdropped while he was talking. The sweetness and optimism of the call moved me. When he got off the phone, I admitted my listening in on his side of the call and how touched I was as he spoke about his late wife. We went on to talk about the present and the future. Life was precious.

Seven years ago this October, I was working in Palo Alto USD and, in a single moment in the middle of a workshop, I decided to move on from my role at the district. It was a Friday. That afternoon over drinks I shared my declaration and my friends took me very seriously. “You are quitting this month?” No. I wasn’t going to do that mid-year. I took my leave the following June.

Now it is October 2019. Last week, I saw a Gaping Void post online: How Letting Go Can Help Your Work Life – by Marla Gottschalk. She wrote,

“Letting go of a goal isn’t a defeat.
It does not a signal failure on your part.
It may mean that the goal no longer serves you.
It may mean you have committed your best effort — and the outcomes/rewards weren’t there.
It is closure.
It is about shifting your energies to fertile ground…
It can mark the moment of a new beginning.” 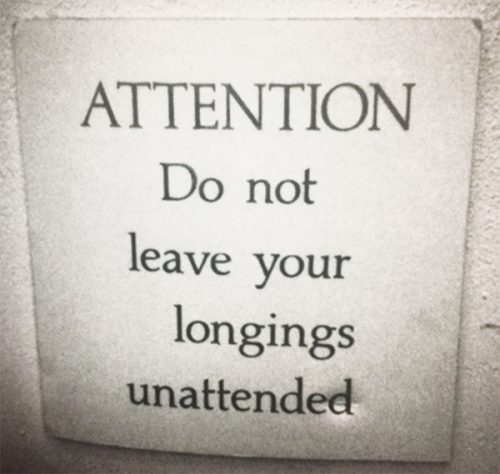 If these comments above speak to you and you need to be on ‘more fertile ground’ I encourage you to go for it. Seven years ago, I left the district to become a communications consultant and a ‘universal teacher being.’ You have only one life.

I took the picture seen above at a museum I was able to see while I was working in Curitiba, Brazil which, again I wouldn’t have seen had I not moved on. It says, “Don’t leave your longings unattended.” Clever spin of words, eh? And powerful. Life is precious. What longings have you left unattended?

﻿If you have any questions, comments or topic suggestions, please feel free to email me at Jennifer@jenniferabrams.com. I look forward to hearing from you!

A few shorter and lighter resources for this month. I have professional books to suggest as well – but later.

Relax by Ellen Bass. I think this poem perfect for the theme of this blog.

Zen Page a Day Calendar. Every day’s quote brings makes me pause. Order it for 2020.

Succession is my go to TV show these days. Rotten Tomatoes writes, “Peppering its pathos with acid wit, Succession is a divine comedy of absolute power and dysfunction — brought to vivid life by a ferocious ensemble.” As a former English teacher, this show is Shakespeare meets Rupert Murdoch with a phenomenal cast who nails it.